In Hinduism, while on the one hand there are general moral codes and duties to be followed by everyone in the population, there are more specific duties which are meant for certain specific people as per their own nature (Swa-dharma). These were broadly divided into four categories or Varnas. To use the word “caste” interchangeably with Varna is contextually wrong, since caste was derived from the Portuguese word ‘casta’ which means breed or race. Broadly speaking Brahmins were teachers, Kshatriyas were warriors, Vaishyas were the merchants and Shudras the service providers. 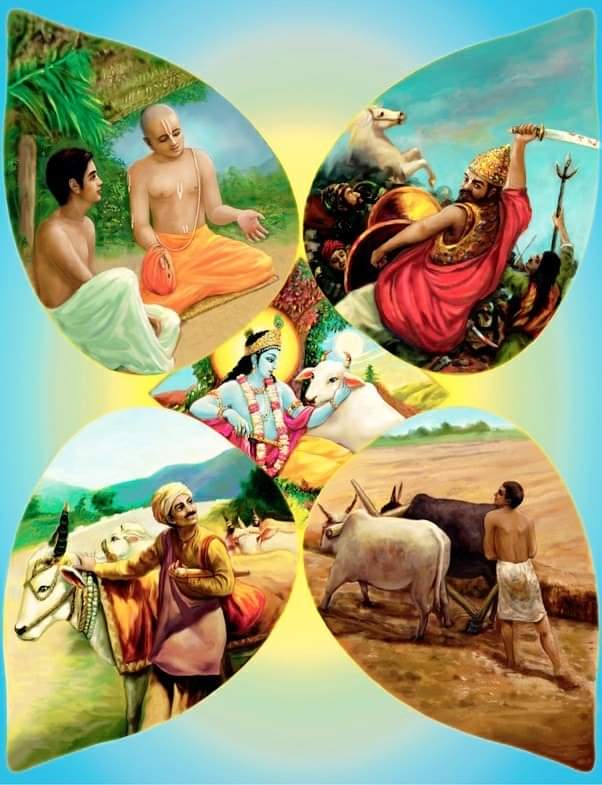 According to the three modes of material nature and the work associated with them, the four divisions of human society are created by Me. And although I am the creator of this system, you should know that I am yet the non-doer, being unchangeable.

As per a sloka in the Rig Veda, the four Varnas were compared to the four limbs of the society, with Brahmas being the mouth (providing wisdom and guidance), Kshatriyas were the arms (providing strength and protection), Vaishyas were the thighs (commercial and business / support to the body) and Shudras were the feet (productivity and sustenance). Each one of these limbs are important and no part is more important than the other.

It is far better to discharge one’s prescribed duties, even though faultily, than another’s duties perfectly. Destruction in the course of performing one’s own duty is better than engaging in another’s duties, for to follow another’s path is dangerous.

Let us look at how these Varnas were classified traditionally, in more detail.

Thus we see how this classification is based on Karma (profession) and Guna (individual qualities and character) and not just by Jati (by birth).